One of the many warnings pet owners who consider feeding raw dog food get is that there is a serious risk of getting infected with salmonella and/or ecoli. Can you get Salmonella & E.coli from raw dog food?

There have been various studies done (JAVMA 2001 & 2013), and yes they do say [quote] “CAN POSE A RISK” for the young, elderly and infirm HOWEVER there are some points to be made about this…

1. Note the wording …. RISK – now it doesn’t tell there have been actual incidents of people contracting either e-coli or salmonella for their dogs food. No incidents of this actually happening were noted

2. It is important to remember that most, if not all raw meats, get batch tested by UK suppliers for salmonella and e-coli, DEFRA equally has different standards then the US equivalent (where the study took place).

3. Many dogs carry & shed salmonella regardless of diet, it becomes an issue if they are severely health compromised. Also if you look at the incidences of dogs actually contracting salmonella poisoning it would be wise to consider all the terrible news from the US of recent years where many many dogs (thousands) have become very ill due to kibble. Dogs poo is called waste for a reason, equally a dog has some serious stomach acids – it breaks down bone!

4. Apart from green tripe, many raw feeders feed human grade meat – so how is the handling of this meat any more dangerous to handling of your own meat?! How is the dealing with a raw chicken for your family or your dog different?

So we did our own survey to see out of 1000 people how many people and dogs got ill from their pets food.

This survey was conducted to find evidence of humans or dogs contracting Salmonella or EColi from raw or processed dog food. A SurveyMonkey questionnaire was posted on Facebook on 27th Sep’14. The first 1,000 respondents were included, reporting their lifetime experience of Salmonella and Ecoli in humans and dogs. At the time of the survey they were keeping 2448* dogs, and the survey closed on 29th Sep’14.

NO humans had contracted Salmonella or E.coli from dogs or any type of dog food.

There were 32 cases of humans having contracted Salmonella or E.coli. Most cases were due to either prepared food from takeaways and eating out, or undercooked home prepared food.

There were also a few cases due to hospital infections.

NO dogs had contracted Salmonella or E.coli from raw dog food.

3 dogs had contracted Salmonella or E.coli from dry dog food.

5 other dogs had contracted Ecoli from other causes, included wounds and infections.

Salmonella and E.coli are present in many foodstuffs, and this survey confirms that the risks to humans are predominantly due to poor handling, preparation and cooking of human food.

The risk posed to humans and dogs by dog food is negligible by comparison.

The fact that there were NO cases of Salmonella and E.coli in dogs due to raw dog food, may be explained by the fact that raw food can be inspected before feeding, and it does not require much preparation or handling, or cooking, which are the big risk factors.

The fact that dry dog food was the only food-related source of dogs contracting Salmonella and E.coli, may be explained by the large-scale sourcing of variable quality ingredients, the extensive handling, preparation and cooking processes involved, and the fact that it is virtually impossible for dog owners to see or smell any problems with the resultant “nuggets” or “kibbles”.

* Respondents stating that they had “11 or more” dogs were counted as 11 dogs. 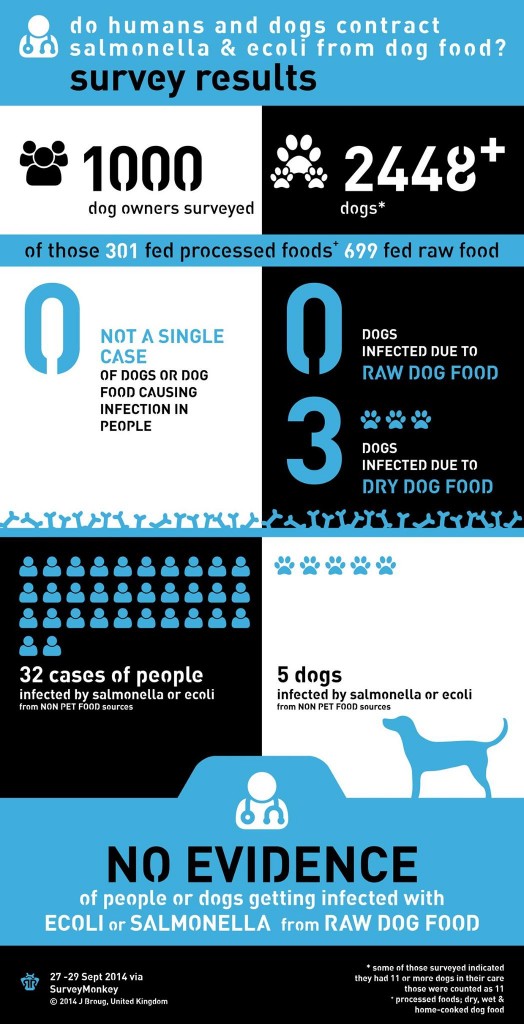